FOSFITAL EXTRA is a biostimulant based on Potassium Phosphite with a dual function on crops: on one side, it acts as a source of phosphorus and potassium, and on the other, it acts as a stimulant of selfdefense mechanisms of plants against fungal pathogens and, also, acts directly on its metabolism to combat it, due to the presence of phosphorous as PHOSPHITE ion. 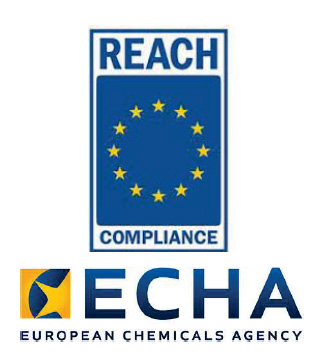 FOSFITAL EXTRA has the EU REACH registry, which regulates the registration, evaluation, authorization and restriction of chemical substances and preparations,with the aim of guaranteeing a high level of protection of human health and the environment.

FOSFITAL EXTRA has the EU REACH registryFOSFITAL EXTRA is formulated in special stainless steel reactors, equipped with a double jacket and connected to a closed cooling system by means of “chillers”, through which water flows at a suitable temperature to temper the exothermic reaction that occurs during its manufacture, conferring a greater stability to the formula.

During its manufacturing process, proper handling of temperature, pH, speed and stirring times, as well as the order of addition of raw materials are essential to ensure a high quality final product and high efficiency in the field. 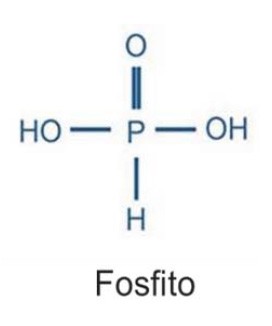 Phosphorus (P) is one of the essential elements required by all living organisms. It is very reactive and rapidly combining with other elements such as oxygen (O) and hydrogen (H). When it is not fully oxidized, H occupies the place of one O atom and the resulting molecule is called phosphite (or phosphonate), chemically represented as PO3-3.

The phosphite ion can present ionic bonds (sharing electrons) with the hydrogen ions (H+) forming the phosphorous acid (H3PO3) or forming salts through the union with other cations (K, Ca, Mg, etc.). 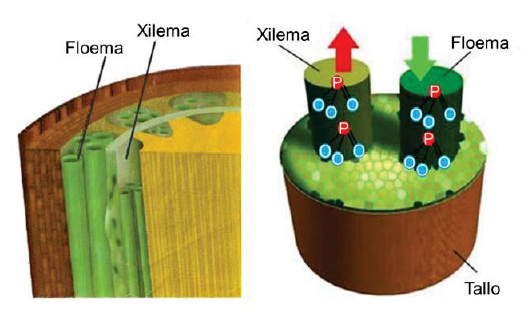 The phosphite ion is systemic, easily absorbed and translocated through xylem and phloem to all areas of plant.

Its transport by phloem allows it to reach the roots for the control of diseases caused by fungi of the soil in addition to those of foliage.

The use of Potassium Phosphate in agriculture is an important tool due to the remarkable features of phosphite ion, being able to produce a rapid stimulation of important metabolic processes in plants, causing the following effects:

The gummosis of crops 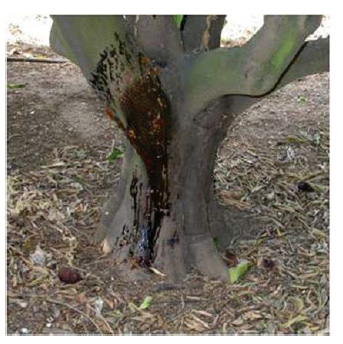 The pathogen’s propagules present in soil can directly infect roots and the base of crops.

Symptoms of these diseases are only visible after several months from infection, showing lack of vigour and generalized decay. First symptoms in trunk and main branches are not visible externally, as they consist in a darkening of phloem and cambium. As infection progresses, affected areas begin to crack and emit gummy exudations. In addition, it will make fruits and leaves smaller, and leaves to turn yellow.

The watering of fruits 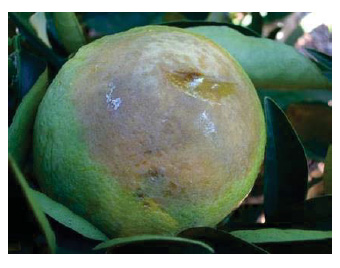 The splashes caused by rain disseminate the pathogen’s propagules from ground to fruits.

Symptoms of watering can appear after 3-7 days from infection. They are characterized by soft brown rot, which progresses until affecting the whole fruit, that will finally fall to the ground. When the fruits are harvested with still recent infection, it usually develops later in the store.

2) The double fungicidal effect of the ion phosphite is because it has:

Direct action on fungal metabolism (fungistatic effect)Phosphite ion competes with phosphorus in different metabolic pathways catalyzed by fosforilatives enzymes, for example, in the phosphorylation of AMP and ADP to ATP.

In this way, the processes involved in energy transfer of the fungus suffer a considerable delay and may even be blocked. The effect on fungus could be compared to a state of total absence of available phosphorus in plant to meet the needs of the fungus. The phosphite ion can suspends fungal growth and development, or the germination of their spores (fungistatic action). 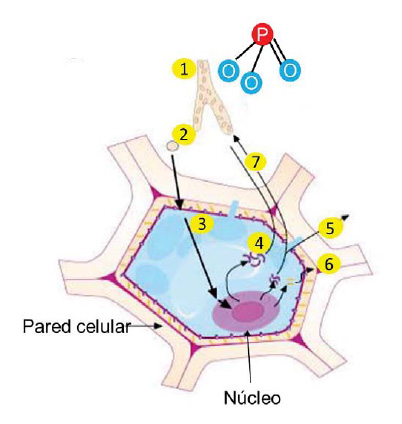 Action of the phosphite ion in fungi and plant cell.

So that the plant can assimilate phosphorus, it is necessary that the phosphite can be converted into phosphate. The average time for oxidation of phosphite to phosphate is 3 to 4 months thanks to the microorganisms present in soil and/or in leaves.

Due to this and because the effects explained above are produced by the phosphite ion, the element that accompanies it acts as a nutritional, in this case, potassium (K).

Potassium is a primary macronutrient that plays an important role as plant functions regulator.

This element affects the plant shape, size, color and taste and other measures attributed to the product quality, for several reasons:

Because the phosphite ion acts on both pathways (phloem and xylem), it enriches the descending sage providing extra energy to overcome stress situations. For example, the leaves close the stomata in situations of stress. When they receive potassium by xylem it causes its opening, resuming the vegetative activity.

NOTE: EIt is compatible with most of the available fertilizers and phytosanitary products, even though it is advisable to perform a previous test. Do not mix with mineral oils, sulphur or products containing copper. In the latter case, after the application of a copper compound, wait at least 15 days before application. 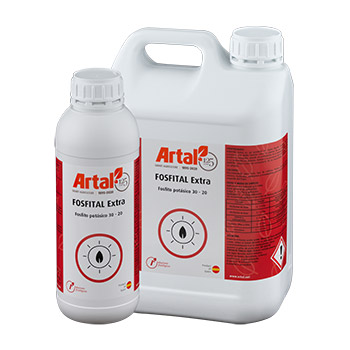