Developed to be used as a source of this element, specially by foliar application, and to correct insufficiencies due to deficiencies or imbalances in the assimilation of Manganese. 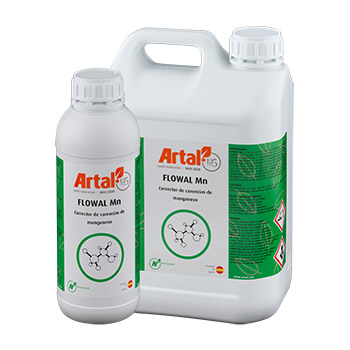 FLOWAL Mn is a product made out of chelated Manganese developed for its use as a source of this element and to correct insufficiencies due to deficiencies or imbalances in the assimilation of Manganese. Thanks to its chelating agent, it is quickly absorbed and assimilated by the crop. The pH interval for which a good stability of the chelated fraction is guaranteed is from 1.5 to 9.

Because of its acid reaction and the properties of the chelating agent, FLOWAL Mn avoids imbalances and corrects Manganese deficiency states. This element is a catalyst for respiratory reactions, is a part of the chloroplast molecules, to which it gives stability, and is connected with nitrogen metabolism. Intervenes in photosynthesis and several enzymatic reactions.

FLOWAL Mn is specially developed for the preventive and curative control of manganese deficiencies manifested in compact soils, badly drained soils, alkaline soils, low- potassium soils or with antagonist elements present. It is advisable to apply it during sprouting and during the higher development stages of the crop.

You can find more information about Manganese deficiencies in Deficiencies guide and know our technical report on Chelates and complexes.

DOSES AND DIRECTIONS FOR USE

2 educational videos about the trace elements, chelates and complexes that make up our deficiency correctors.