MICROPONIC Eco is a trace elements complex, with a balanced formula that keeps a correct nutritional balance 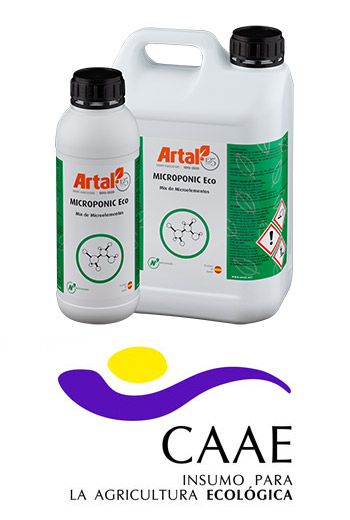 MICROPONIC ECO is a trace elements complex, with a balanced formula, that keeps a correct nutricional balance avoiding imbalances or correcting trace elements deficiency states. Due to its acid reaction and the properties of its chelating agent, it is quickly absorbed and assimilated by the crop.

MICROPONIC ECO is recommended to provide a proper nutritive balance in crops, increasing their potential, given that the supply of trace elements increases the activation of the enzymatic processes and the energetic metabolism of plants.

It is advisable to applicate it during the whole cycle preferably, during sprouting and during the main development stages of the crop.

*Trace elements as HEEDTA chelates, except for boron and molybdenum, which are in inorganic form.

Doses and directions for use

Because of its totally assimilable formula, MICROPONIC ECO can be applied by foliar or root feeding using any kind of irrigation system. Avoid its use during high insolation hours. General application dosages: Foliar: 2-4 l/ ha. Root: 2,5-5 l/ha and application.